#SpectacularSouthAfrica in June celebrates Chenin Blanc, the variety where, while plantings have decreased, quality and image have risen immeasurably since the mid-1990s.

Wine magazine’s Chenin Blanc Challenge stimulated interest and in 1999, the Chenin Blanc Association was formed. The Association immediately recognised the importance of old vineyards, as recorded in the Minutes of the Association’s first meeting: ‘The most important issue that needs to be addressed is the evaluation of the very old chenin vineyards, some of which are in immediate danger of being uprooted to make way for trendier and currently better paying varieties!’

Eventually, with official help, five of the oldest blocks of Chenin were identified; the oldest, Mev Kirsten, was planted in Stellenbosch between 1905-1920. Today, the vineyard is recognised under the renowned Mev Kirsten label in Eben Sadie’s Ouwingerdreeks range.

The second oldest was planted on Kaapzicht in 1947 by current winemaker, Danie Steytler’s Great Grandfather. Its fascinating story tracks the wine industry over the past 72 years, as Danie relates. ‘In those early days the whole crop went to KWV, who paid for quantity rather than quality, the reason why my Great Grandfather chose generous-bearer Chenin. The bush vine vineyard was originally six hectares, but as it aged, yields decreased to between three and five tons per hectare, thus, due to low grape prices for bulk wine, it was running at a loss. There were also some dead vines, but we had neither money nor time to replace the vineyard. We eventually decided to pull it out and were over halfway through when the Chenin Blanc Association awarded us ‘Custodian’ status in 2009. Oh dear!’

The Custodian award coincided with Danie’s first year on Kaapzicht and encouraged him to seek advice from former Stellenbosch University mates, Chris Alheit and Chris Boustred on wooded Chenin. Kaapzicht Wooded Chenin Blanc Reserve from the 1947 vineyard, was released in December 2009, but to Danie’s disappointment; ‘it took four years to sell out and wasn’t a success.’

In the meantime, interest incre 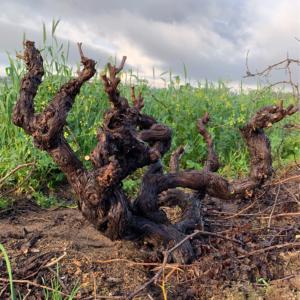 ased in Chenin and the Old Vine Project. The first new-look The 1947 Chenin Blanc from 2013 received immediate Platter five-star acclaim, 2014 and 2016 followed suit. Today, the annual 900 bottles, are on allocation. It’s the real rags to riches story that nearly wasn’t. From 2018, The 1947 bears the Old Vine Project Heritage Vineyard sticker.

Of the roughly 3500 hectares of vines 35 years and older (2018 figures), Chenin Blanc accounts for over 1800 ha. Unsurprisingly, they produce many of South Africa’s top Chenins: Alheit Huilkrans, Beaumont Hope Marguerite, David & Nadia Hoë-Steen, Ken Forrester The FMC, Stellenrust Barrel-Fermented Chenin Blanc, as well as The 1947 and Mev Kirsten. If old vine Chenins are only ever produced in limited quantities, their high quality is compensation.

Chenin Blanc and the Association have done much to promote the benefit of old vines and the OVP, while the OVP, with its clearly drawn principles, has done much to heighten awareness of Chenin Blanc. It’s a wonderfully symbiotic relationship.